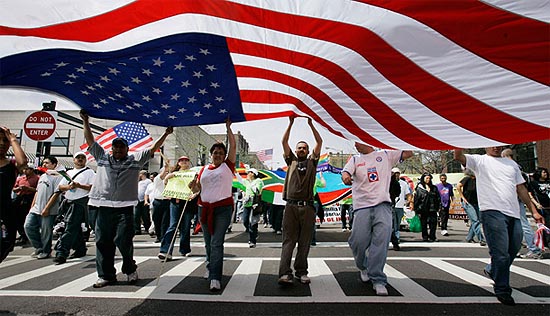 Arizona’s religious leaders say it’s time for a ‘moral voice’ on immigration, but they’ve got their work cut out for them.

NOTE: This version of my column corrects regrettable editing errors made by Phoenix magazine.

Grant us courage to discover our own face  and future in those of the immigrants among us.” These are not the words we’re used to hearing in Arizona when talking about illegal immigration. The words in this “ground zero” state are usually more heated – angry, frustrated and sometimes downright scary.

From the Statehouse to right-wing radio personalities to anti-immigration rallies to Maricopa County Sheriff Joe Arpaio’s “sweeps,” the loud voices we hear sing one song. Arizona’s public policy on this issue can be summed up in one word: deportation. This state’s stand has been that the only immigration “reform” needed is to expel everyone who’s here illegally, whether they came here yesterday or have raised families here for years. Entire political careers have been built or are being built on the cry of deportation.

But this gathering wasn’t like that. Nobody was shouting or screaming. Reverend Jim Perdue’s plea was the start of a “community prayer” that sings a very different tune: “Undocumented immigrants living peaceful and productive lives among us deserve a chance to earn their legal status and eventual citizenship. Let this be once more the hallmark of our nation.”

This minister of the United Methodist Church was one of more than 70 religious leaders and some 150 others from throughout Arizona who gathered January 22 in Casa Grande under the banner of the Interfaith Council to raise a moral voice on immigration.

The entire hierarchy of the Methodist Church in the western United States was there, as well as Catholics, Episcopalians,  Baptists, Jews and evangelicals. This group promised to spread the truth about the immigration story – not the myths and distortions that have dominated this issue in Arizona – and I came away thinking that was just as powerful as their prayers.

The meeting was led by Catholic Bishop Gerald Kicanas of Tucson and Methodist Bishop Minerva Carcano of Phoenix. It had a clear message: a direct plea to President Obama and Congress “to enact humane and comprehensive immigration reform.”

“Arizona is ground zero for our nation’s broken immigration policies,” Bishop Carcano noted. “At our borders and in our congregations, schools, workplaces and service programs, we witness the human consequences of our inadequate, outdated system. As people of faith, we pray for an end to this injustice.”

Reverend Perdue’s prayer continued: “Family unity among migrant and immigrant families should be protected and upheld. Let each family be as important as our own.”

Reverend Gary Kinnaman, who for 25 years headed the Word of Grace evangelical mega-church in Mesa, admits that evangelicals “have generally not been at the table” on this issue, but he is firmly seated. He’s become a spokesman for conservative ministers on immigration reform.

He urged the gathering to break down the barriers between evangelicals and the rest of the religious community for a united fight, because “this is a humanitarian crisis.”

“We are here as religious leaders to speak with one strong, unified voice of moral leadership,” noted Father Glenn Jenks of St. James Episcopal Church in Tempe. “We are here to organize, teach and lead a program of action that will help people who have lived in fear and suspicion and pain and welcome them out of the shadows and into the light where they can live in the peace and prosperity promised them as children of God.”

Father Glenn knows his words won’t move everyone. “There’s a group we’ll never reach because their opposition is racial and nativist,” he told me. “Then there’s people who don’t pay much attention, but they listen to the propaganda and they just want to protect their jobs and they want to get their kids educated and they fear immigration reform threatens that. That’s the group we’re trying to reach because we can prove immigration reform is good for the economy.”

I can hear the anti-immigration groups now: Illegal immigrants are stealing American jobs and driving down wages for everyone. They’re criminals here to do us harm, suck off the public teat and threaten our nation’s security.

That’s exactly the sentiment Senator Russell Pearce, R-Mesa, echoed in an e-mail to me when asked to comment for this column.

“I call on them to have a moral conscience for those who have been killed and maimed by illegal aliens and a respect for the law,” he wrote. “What does it take???? How many more must die? How many more jobs taken from Americans? How many more billions do taxpayers have to pay to educate, medicate and to incarcerate illegal aliens?…. What part of ‘illegal’ do they not understand?”

Senator Pearce sees himself as a moral man. “I am not hateful and my heart goes out to many nations and people that struggle under dire circumstances,” his e-mail continued. “But I also recognize my duty to God, Family and Country and will honor that obligation…. I will not apologize for standing up for America and Americans.”

These religious leaders say they’re standing up for America and Americans, too, but that they’re doing it with facts, not myths. Let’s take a look.

Myth 1: Illegal immigrants have high crime rates. One of the most thorough studies done on this subject was published this March and is titled His-Panic: Talk TV Sensationalists and Axe-grinding Ideologues Have Fallen for the Myth of Immigration Lawlessness.

Sounds like a left-wing apologist, doesn’t it? It actually was written by Ron Unz, publisher of The American Conservative. His study convinced him this is a “crime hoax.” He writes: “While there is a widespread popular impression that immigrants, especially illegal immigrants, have a propensity for violent crimes, actual studies invariably come to the opposite conclusion: For almost every ethnic group, Hispanic or otherwise, immigrant generations have lower rates of crime….”

He warns that the right will “discredit” any legitimate concerns about immigration by supporting “the myth that Hispanic immigrants and their children have high crime rates.  Such an argument may have considerable emotional appeal, but there is very little hard evidence behind it.”

Sen. Pearce points to some gut-wrenching crimes that have been committted by illegals, lumping them all into the category of potential criminals.  I agree with the religious community that this is unjust: It’s like saying American white men in their 20s and 30s are all terrorists because Timothy McVeigh blew up the Oklahoma City Federal Building on  April 19, 1995, killing 168 and injuring 680 more.

Myth 2: Undocumented immigrants do not pay taxes. Multiple studies show that immigrants pay taxes on their homes – either property taxes or the pass-through taxes on rentals – as well as the same sales and consumption taxes as everyone else, The Urban Institute noted in a 2005 report. In addition, many pay payroll taxes into Social Security that they are ineligible to collect. The Social Security Administration estimates illegal immigrants contribute up to $7 billion a year into Social Security.

Myth 3: Illegals come here to get welfare. The Urban Institute notes that not only are illegal immigrants “ineligible for welfare, food stamps, Medicaid and most other public benefits,” they primarily come here to work.

Myth 4: Illegals take jobs away from Americans and drive down wages:  To debunk this, listen to the Libertarian Cato Institute, which is dedicated to understanding “limited government, free markets, individual liberty and peace.”  This group insists the evidence shows just the opposite–that illegal workers are good for the American economy and our economic woes would be compounded without them.  “An outpouring of research since the early 1980s is an embarrassment of riches,” it notes, stating that “immigrants have practically no negative effect in the labor market on any person except other immigrants.  The effect on wages is modest by any appraisal and the effect on unemployment apparently is zero.”

The Cato Institute also stresses that immigrant labor is crucial to the economy.  “The overriding impact of immigrants is to strengthen and enrich American culture, increase the total output of the economy, and raise the standard of living of American citizens.”

I kept asking one question at the religious convocation in Casa Grande, because it’s something that has long bothered me:  When did illegal immigrants become such demons?  How could the likes of Lou Dobbs and Glenn Beck and J.D. Hayworth and Russell Pearce turn people who have lived and worked with us for decades into such bad people that the only answer is to throw them out of the country?

Nobody had an answer.  They just knew those songs are wrong and, as religious leaders, they must raise a chorus to bring the nation back to its humanity and its moral center.

Reverend Perdue’s prayer summed it up best: “Let all of us treat others as we ourselves wish to be treated.”