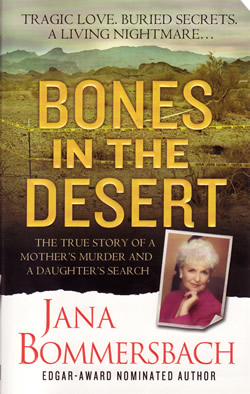 Jana first wrote about the murder of a valley businesswoman for this magazine. Now, she’s turned her stories into a book, due out this month.


I’ve written many types of stories in my career – funny, sad, tough, soft – but the hardest ones to write are the haunting stories, the “if only” ones that could have had a different ending.

Those are the ones that break your heart.

My new book, Bones in the Desert: The True Story of a Mother’s Murder and a Daughter’s Search, is the tragic tale of Loretta Bowersock’s death and her daughter’s relentless quest to find her body, which had been buried in a remote desert location. The book is being published this month by St. Martin’s Press in New York.

The idea for the book came from two PHOENIX magazine features that ran in 2005 and 2006 – the first articles from this magazine to become a book, I’m proud to say. I’m happy to share a sneak peek of my book with you, and I hope you enjoy the rest.
The book begins with this prologue:

It’s one of those cute pictures you blow up and frame because it’s not only flattering, but shows such a happy couple at such a happy moment.
The picture was taken on an Alaskan cruise, just before another scrumptious feast, in November of 2004.

Loretta Bowersock’s beautiful smile fills her pretty face as she snuggles next to her handsome man – she calls him her husband, but she and Taw Benderly have never legally tied the knot in all the eighteen years they’ve been together.

You’d never know that from this picture, snapped by Loretta’s daughter, Terri, who treated them to this amazing cruise.

Their body language is so intimate, you can imagine they shared a kiss after the camera finished. And you just know they’re going to show off this snapshot to everyone who visits their happy home.

Who could possibly believe that within a month of this picture, that man would kill that woman?

This is not a typical murder story. Not from where it happened, to why it happened to someone you’d never dream it could happen to. And certainly there isn’t usually the grisly aftermath of a murder without a body – a body thought stashed somewhere in the vast Sonoran Desert around Phoenix; a body with no proper resting place where loved ones come to grieve; a missing body that prompted a thirteen-month search and fears that beautiful 69-year-old Loretta Bowersock had ended up a coyote’s evening meal.

Murder doesn’t get more personal than this one, which shocked the 48th state just before Christmas in 2004 – losing a beautiful, successful businesswoman and mother of the state’s “Domestic Diva.” Over the last quarter century, the mother-daughter team of Loretta and Terri Bowersock had gone from rags to riches in front of everyone’s eyes, and become one of Arizona’s favorite triumphs. They were television commercial stars – ads they wrote and acted in themselves – touting the “gently used” furniture of a new type of consignment business that made them rich. And their background story was so compelling: Terri became a nationally celebrated darling, winning coveted business awards and featured on Oprah. Dyslexia hadn’t stopped Terri from becoming a millionaire, Oprah gushed, even though, “she couldn’t even fill out a job application.” Terri only made it with the help of her mom and a loan from her grandma. It was a true American success story.

Now here was such an ugly chapter. Most people never know a murder victim, but this time, almost everyone in Arizona did. For many, this felt like a murder in the family. The state’s media covered the story as though Terri were their mourning sister – hanging with her long after police stopped searching.

Her other lifeline was a heard of psychics, who flocked to this case almost instantly. They came in person, over the phone, by letters, by emails. They came with their “visions” of the murder and “maps” of the burial site. They came recounting “conversations” they’d had with Loretta. And they eventually came with anguished utterances from Taw before he “crossed over.” Terri clung to their every word, keeping the faith that they really could see something; that they really were hearing Loretta give them clues on where to find her. Some thought Terri was nuts to be so taken in, but two police officers would later admit that at least one psychic had indeed helped the case, and the national TV show, Psychic Detectives, would crow about it.

In the meantime, hundreds of condolence cards, letters and emails came into Terri’s home and office, as the nation reached out to comfort her.

“I just wanted you to know many, many people are thinking about you and praying for you,” Rosie wrote. Craig Stull called to say he owned a helicopter and would help search the desert. “I can’t stop crying, it is sooo sad what happened to your mom,” wrote Tanya. Janet and Paul said they were in town on vacation, but wanted to help search. Customers stopped in the four consignment stores to tell the clerks how devastated they were. Church people put Loretta on their prayer lists. One little boy wrote saying he couldn’t imagine how much pain she must be in, losing a mom and not knowing where she was.

None of them had any idea of the depth of Terri’s anguish. Because there was so much more than appeared on the surface.

This isn’t just the tragic story of a daughter losing her mother in the worst possible way. This is the heartbreaking story of a grown child searching in death for a mother she’d already lost in life – a daughter who had seen her mother’s betrayal and felt the sting of rejection, all for the man who moved into her mother’s home and heart, and pushed aside everyone else. The rip in their relationship had been so painful and ugly, Terri felt as though Loretta had “died” long before the murder. The two had spent years trying to mend their lives, and just now, just in the last few months, things had gotten so much better. They’d had such fun on the Alaskan cruise. And then, unbelievably, it was all over.

Still, it’s impossible to stand in front of Loretta’s one-story brick house in Tempe, with its pillars, double garage and red front door, and imagine any of this happening. This is how most of Arizona lives, in nice neighborhoods with great grass lawns and oleander bushes that bloom in winter. This is where sane people live, safe people have dinner, secure families make lives.

Loretta Bowersock had lived here almost thirty years, buying it for a song, and watching it skyrocket in value to a nice nest egg she could count on. She intended to spend her last days here.

The sad thing is, she did. But Loretta didn’t leave her beautiful home from the red front door, which was already festooned with a Christmas wreath that December day in 2004.

She left wrapped in black landscaping tarp, duct taped shut around her throat, her chest, her legs. But nobody would discover that for a very long time. Taw would insist that she’d just gone missing on a Tucson shopping spree and he had no idea what happened to her.

This man, who thought he was the smartest guy on the planet and “could talk snow off a snowball,” spent his last days bitterly complaining that police were after him, like he was some Scott Peterson killer or something, and how could they think that? He even shed tears. His death came at his own hand, and all the secrets he knew about Loretta went to hell with him.

But he wasn’t done, even then, torturing everyone who’d ever loved Loretta – her daughter, her son in Hawaii, her three living sisters, the love of her life who’d slipped away, her many girlfriends.

As Terri emptied her mother’s house, she discovered a shocking life she’d never guessed was lived here. The remnants Loretta and Taw left behind showed that cute picture was a lie – this was not a happy home with a loving couple, but a house of despair and abuse, of anger and conflict, of cheating and stealing and forging and defrauding.

And what Terri read in her mother’s private journals – page after page of Loretta’s most intimate thoughts and fears – broke her heart.

Terri was about to learn her mother was a “classic case of elder abuse.” Loretta fit the awful pattern to a T. Some had seen it coming, but either couldn’t or wouldn’t stop it. “We were raised to keep peace in the family at any cost,” one sister would say. Loretta’s price had been to stay out of her business. It’s a far too familiar story to far too many American families.

Terri is now determined her mother won’t end up just another statistic. She’s created a new business to raise money to help other women escape from the clutches of elder abuse.

Terri wants women like her mother to know there’s an alternative – women from the generation that can’t stand to face their senior years alone; lonely women who believe they’re better off with a bad man than no man at all.

By the time Loretta Bowersock realized how wrong that was, she’d run out of time to save herself.
This is the inside story….