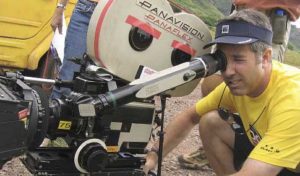 There was a time when Arizona was the first choice for movie producers. That’s no longer the case, but the governor is taking steps to recapture Hollywood’s attention.


Wouldn’t we be lucky if Arizona had some gorgeous, God-given beauty that could make us a fortune? And wouldn’t it be wonderful if this state had been blessed with vistas and valleys that could become a lucrative “clean industry” – bringing money and jobs without pollution or depletion?

Can you imagine such a gift? Just think how movie and television producers would flock to Arizona. And think of the rooms they’d rent and the equipment they’d need and the people they’d hire and the bar tabs they’d pay.

If only Arizona could be more like her fortunate neighbor, New Mexico. The “land of enchantment” knows what it has, and it’s passed incentives to make sure that everyone else knows, too. They’re raking it in over there, those lucky devils.

Why, why, why couldn’t the Almighty have bestowed on Arizona some of the same gifts it gave to Colorado, where the movie industry is thriving? But wait a minute! Arizona is blessed with a beautiful landscape. In fact, there are unlimited numbers of places in Arizona that are drop-dead gorgeous. Not only that, but within its boundaries, there are seven of the nine climate regions found in North America. Now that’s something.

The thing is, New Mexico doesn’t have that kind of diversity. Neither does Colorado, nor any of the other neighboring states. Yet, all of them are raking it in from the movie industry, while in Arizona, filmmaking is on the decline.

There’s definitely something wrong with this picture. Arizona has managed to squander this golden opportunity, and, as usual, the source of the blame is the state Legislature.

Arizona has been the backdrop for movies since the early days of the old Westerns, and thousands of films have been shot here since then. In 2003, for example, a total of 427 projects were filmed in Arizona. And last year, among other things, Bisbee was the setting for the $9 million television movie based on Stephen King’s novel Desperation.
And when you look at the raw numbers, they seem impressive. The film industry in Arizona today translates to $107 million in direct economic activity – that number is nearly doubled when you add up the indirect activities. A new state report also finds that the film industry created 612 jobs with almost $22 million in direct wages – indirectly, there were 1,700 jobs and more than $56 million in wages.
But when state officials look at those numbers, they know they’re not only down from previous years, but they’re just a fraction of what Arizona could be bringing in.

“We are at a crossroads,” says Deputy Commerce Director Joe Yuhas, who runs the state’s film office. Competition has never been fiercer for the film industry dollar, he says. Not only have many states realized what a bonanza this is – and most have instituted economic incentives as a lure – but foreign countries also offer great filming opportunities at even cheaper prices. So, for Arizona to keep what it has and eventually grow, it has to reverse what’s been happening.
“Over the past several years, the film budget has been cut,” Yuhas explains. “The budget high occurred in the mid-1990s at $800,000. Now, it’s below $300,000. At one time, we had a staff of eight in the film office. Now, there’s two-and-a-half. Overall, there’s a lack of commitment – film production wasn’t considered a priority.”

Unfortunately, when you start digging into those numbers, you find that they’re even worse than they sound. Until last June, Arizona didn’t even have a full-time director for its film office. And for three years, the director had been a part-time employee of the commerce department.

The result of that neglect can be seen in dollars and cents. Since 2000, employment declined in Arizona’s film industry by more than 26 percent, according to a report prepared by the Arizona Department of Commerce. At the same time, average annual salaries for film industry jobs dropped by 25 percent. Only 21 percent of Arizona production money comes from out-of-state sources, while in Colorado, it’s a whopping 75 percent.

But instead of seeing the red flag they’d created with their budget cuts, the Legislature has constantly been thinking of new ways to decrease the state’s efforts at economic development. In a move seen as stunningly stupid, some lawmakers actually wanted to eliminate the state’s tourism office and close the commerce department. Keep in mind, this is a state were tourism is the No. 2 industry, and the commerce department focuses on rural economic development. Thankfully, cooler heads – and a governor who wouldn’t put up with such foolishness – prevailed.

This legacy is well known to everyone who dreams of a strong film industry in Arizona, and everyone involved is hoping the new Legislature will be more enlightened, because they think this investment can pay off big, not only in Arizona’s cities, but in its rural communities as well.
“While we’re retreating, other states have stepped up – other countries have stepped up,” Yuhas notes. And everywhere they’ve stepped up, they’ve cashed in.

A dramatic example sits on our eastern border. In 2002, New Mexico’s Legislature and governor agreed to invest in their film industry as an economic boost – they enacted legislation that provides sales tax exemptions, income tax credits and no-interest loans on film productions. The year before those incentives took place, New Mexico brought in $8 million from the film industry. During 2003, the first year of the incentives, the state saw a 10-fold increase, to $80 million. (Apparently, Robert Redford is so impressed with what New Mexico is doing – and what it has to offer – that he’s considering becoming the state’s spokesman.)

New Mexico’s phenomenal jump isn’t an aberration, officials insist. “There is no reason to believe this couldn’t happen in Arizona,” the commerce report notes. A ten-fold increase in Arizona’s film industry would elevate the state to the billions bracket.

But first, Arizona must overcome a tarnished reputation. “Arizona does not appear on the radar screen of most film production companies,” according to the report. “The stigma with Arizona is that the industry as a whole thinks there are not enough skilled crew in Arizona to support the needs of out-of-state productions.”

And one perception fuels another – since they don’t think the professionals are here, the professionals that are here have to go elsewhere to work. But there’s also a good-news part of this message: “In spite of the fact that jobs in this industry have declined over the last several years, Arizona has a solid foundation to build upon.”

To get back on track, Arizona needs to do two things, according to the report: It needs to strengthen the local film industry and promote Arizona to out-of-state production companies. The report isn’t calling for the kind of big incentives that New Mexico offers, but it does suggest a tax rebate for using Arizona talent, technical expertise and equipment. But, most significantly, it offers a wide range of creative ways to cash in on the film cash cow.

For instance, it suggests creating a collaborative partnership to launch a “Film in Arizona” marketing campaign. It suggests strengthening film programs in high schools and community colleges; sponsoring an annual statewide film festival; creating a revolving loan fund with lending institutions for independent filmmakers; and creating an annual filmmaking camp to inspire children in this field.

Perhaps more than anything, Arizona needs to streamline its customer service to make it easier and more efficient to film in Arizona. “This higher level of customer services requires substantially more resources than are currently available at the… film office,” the commerce report notes.

In concert with those suggestions are plans for marketing and promoting Arizona – some ideas are so obvious, you wonder why they’re still on the drawing board. Can anyone doubt that advertising Arizona to the film industry is a good idea?

“We know that for every 100 film industry jobs, another 182 jobs are generated to service the industry,” Yuhas notes. “But film production doesn’t just happen – it happens because of cooperation.”

Last December, the film office took a group of civic leaders to Southern Arizona to visit the set of Stephen King’s movie. And to listen to the movie’s producers on why they’d chosen Bisbee. “We fought tooth and nail to film this in Arizona,” the executive producer told The Arizona Republic. Disney, the company footing the multi-million-dollar bill for the show, wanted them to go someplace that had tax incentives. “We lobbied like crazy at Disney,” Mark Sennet says. “I cut my salary, the director cut his salary and Stephen King cut his salary. It was so much more money for us to come here.”

The historic look of Bisbee was exactly what they were after, and so they took drastic measures to shoot there – with lots of urging from Governor Janet Napolitano, the film office and the citizens of Bisbee. But while they pulled it off this time, few think many film companies would be such purists and pay so much extra to film in Arizona.

Bisbee’s Mayor Dan Beauchamp welcomed the movie’s economic impact on his town. He noted that a crew of about 150 people filled up the town’s hotels, ate in the restaurants, spent evenings in the bars, and shopped in the antiques stores.

“For rural Arizona, the film industry can be huge,” Yuhas stresses. “But to think it just happens is risky at best, and, frankly, is a recipe for disaster.”

“We recognize times are lean, but we need more resources,” he explains. “This is another example of the failure to invest [in Arizona’s overall well-being], but the governor is committed to reversing this. I am optimistic. I’m finding seeds of support in the Legislature.”

For the governor’s part, she recently revived the state’s Film and Television Commission to give it more moxie and to make the case for the kind of incentives that could take the state’s film industry into the stratosphere. Among the marquee names on the commission are actor Leslie Nielsen, former TV newsman Hugh Downs, actor/director Rick Schroder and Cindy McCain, the wife of Senator John McCain. In addition, the governor is supporting Senate Bills 1346 and 1347 by Senator Toni Hellon (R-Tucson), which would offer tax incentives to companies that film in Arizona. Those bills have mixed support, and even if they pass, there’s a long way to go.

“Only five states in the nation spend less than Arizona on economic development,” Yuhas notes. But a new sense of cooperation and commitment is emerging, he stresses. What Arizona does not have in money, “we have to make up for in sweat and spirit,” he says.

Good point. It reminds me of a children’s movie about a little engine that was forever chugging uphill with a vow of: “I think I can, I think I can….”