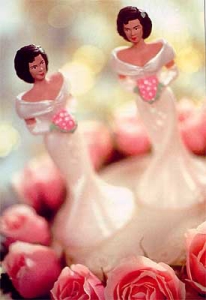 Death-row inmates can marry. So can first cousins, child abusers and Britney Spears. So why not same-sex couples? Well, the Arizona Supreme Court is about to tackle that question.


I never thought I’d ever say this, but I want to thank Britney Spears. Not for being a slutty “role model” for the young girls of America. (And “hello!” to all the mothers who let their daughters dress like her.) No, I want to thank Britney Spears for the 55 hours that proved America’s marriage laws are a joke.
At 5:30 p.m. on January 3 in a Las Vegas wedding chapel, after an all-nighter of drinking and dancing and partying, Britney walked down the aisle on the arm of a hired limo driver wearing torn jeans and a baseball cap. The husband, with whom she was entering the “holy state of matrimony,” was an old friend from high school. Just 55 hours later, the marriage was annulled as a lark. Somebody characterized it as a “joke that went too far.”
Her “un-husband” explained their thought process like this: “We were just looking at each other and said, ‘Let’s do something wild, crazy. Let’s go get married, just for the hell of it.'”
Well, the hell of it is that dumbos like them have every right to get legally married in this country, while committed same-sex couples are forbidden that same right.
You’d think all hell would break loose if we allowed the word “marriage” to identify two men or two women who love one another. For some reason, there’s this notion that the “sanctity of marriage” is threatened by homosexuals, and the foundation of “the family” is in peril. There’s even a group in Mesa ready to raise $10 million to sponsor a constitutional amendment to prohibit same-sex marriages – just think of all the good that $10 million could do in a society with so many needs.
The Roman Catholic Pope has also gone berserk over this issue, demanding that Catholic lawmakers oppose same-sex marriage as a litmus test of their faith (although he was painfully silent about his child-abusing priests).
At the same time, this great “sanctity” is thrown in the gutter every day as the divorce rate reaches 50 percent – only about half of those “holy” unions stay holy. Frankly, I can’t get too excited about the sanctity issue anyway, not when you can get married in front of a fake Elvis.
All of which is why I’m so interested in the case going before the Arizona Supreme Court, which will ask this state to become the fourth in a decade to say the constitution gives same-sex couples the right to marry. And why Britney Spears deserves a thank you for helping make the case.

Here’s what you need to know about Harold Donald Standhardt and Tod Alan Keltner. Standhardt is 34, a pilot and flight instructor. Keltner is 37 and a travel agent. They’ve been in a committed relationship for nearly seven years. They live together, work together sometimes, go to church together, and care for each other when they’re sick. Someday, they’d like to raise children together.
That’s why on July 1, 2003, these two men presented themselves at the Maricopa County Clerk’s office in Downtown Phoenix, asking for a marriage license application.
They were turned away and told that Arizona law only allows marriage between a man and a woman. Seven days later, they filed a petition with the Arizona Court of Appeals.
The appeals court conceded that same-sex couples and their children would “benefit from the stability offered” by marriage and noted the “inequity for children raised by same-sex couples,” but it didn’t find those arguments strong enough. It ruled against the couple, upholding Arizona’s restrictions.
In December, the couple filed their case with the Arizona Supreme Court, asking it to rule that denying marriage to same-sex couples is an “unconstitutional discrimination.” That’s just what the high courts in Massachusetts, Vermont and Hawaii have done; just what courts in Canada, the Netherlands, Belgium, Denmark, Norway, Sweden, Iceland, Hungary, Germany, France and Portugal have done. (A Canadian court has ruled that sexual orientation is an inherent part of a person’s being, just like color and gender.)

These are among the reasons the Massachusetts Supreme Court recently ruled that denying the benefits and obligations of marriage to same-sex couples “works a deep and scarring hardship” on them.

The Arizona Attorney General’s office isn’t moved by those arguments. It thinks things are just fine as they are. It argues exactly what many groups shout: Restricting marriage to male-female couples is justified by the “interest in encouraging procreation and child-rearing within the stable environment traditionally associated with marriage.” For many, this is a compelling argument. Too bad it has no basis in law.
Think about it: Since when do our marriage laws demand procreation? While our churches, synagogues and mosques encourage marriage to add to the flock, the marriage laws of our nation don’t require that the union create children.
If they did, then all of those couples who marry and don’t reproduce wouldn’t really be married – and therefore would have no right to the legal benefits of marriage.
If they did, then couples who can’t have children couldn’t marry.
If they did, then people who never consummate their marriages would be guilty of some kind of fraud.
If they did, then deathbed marriages would be a sick sham.
In fact, in Arizona, we actually allow certain marriages only when a couple can prove they cannot procreate! I know it sounds strange, but this is Arizona, after all, and stranger things have happened. But there is a law on our books that allows first cousins under 65 to marry if they can prove that one of them is “unable to reproduce.”
But it isn’t weird laws or obscure arguments that have led other states to say all of this is so unfair, that our basic constitutional rights demand that we allow same-sex couples to marry.
The high court of Vermont explained its ruling for same-sex marriages with this rationale: “The laudable governmental goal of promoting a commitment between married couples to promote the security of their children and the community as a whole provides no responsible basis for denying the legal benefits and protections of marriage to same-sex couples, who are no differently situated with respect to this goal than their opposite-sex counterparts.”
The high court of Massachusetts has a similar take on the issue:
“Excluding same-sex couples from civil marriage will not make children of opposite-sex marriages more secure, but it does prevent children of same-sex couples from enjoying the immeasurable advantages that flow from the assurance of ‘a stable family structure in which children will be reared, educated and socialized’… It cannot be rational under our law, and indeed it is not permitted, to penalize children by depriving them of State benefits because the State disapproves of their parents’ sexual orientation.”
In other words, according to those states, family values are strengthened when we recognize the right of same-sex couples to marry.

There was a time in this country when we didn’t allow interracial marriage. It was considered an assault on society. Eventually, we recognized that the law was wrong, and today, there are no racial restrictions on who can marry.
Of course, we do restrict the age of marriage, under the sound reasoning that impetuous children can be reckless. But except for same-sex couples, that’s where the restrictions end.
Our laws today allow men on death row to marry women they meet over the internet.
Our laws today allow people to marry and divorce at such a speed that unions are counted by days or months, not lifetimes.
Our laws today allow insane people to marry, and drug addicts and known abusers.
Our laws today allow fools like Britney Spears to mangle and mortify marriage.
To say that society will be endangered if we allow same-sex couples to marry is simply nonsense.
I think when any two people are lucky enough to find each other and love each other, they should be allowed to marry each other. People like Harold and Tod.
I just hope that the Arizona Supreme Court agrees with me.