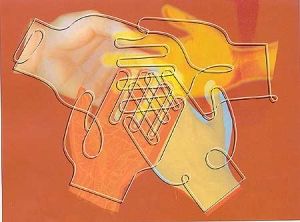 Jimmy Carter travels the world to promote the idea of being a good neighbor. That same idea could go a long way in the state of Arizona, too.


Jimmy Carter sent me a letter and got me thinking. First, I must say that I wasn’t always a Jimmy Carter fan. I was lukewarm about him as a president – he never quite seemed inspiring to me. I remember twittering when he said he’d asked his teenager about the problems of the world.
But since he left office, I’ve gotten to see the measure of the man, and he’s become one of my heroes.
I have watched him and Rosalynn become the kind of international citizens that make us proud. I’ve watched them build homes for Habitat for Humanity – literally, with hammer and saw in hand. I’ve watched him called upon as a levelheaded mediator when nations collide; I’ve watched him speak out for decency and caring.
So it wasn’t a surprise when I got a letter that began: “Both as a farmer here in Georgia and as president of the United States, I have come to value the importance of good neighbors.” It was a solicitation letter, but its simple message got to me.
“Rosalynn and I founded The Carter Center because of our commitment to the quest for peace and health on our planet,” he wrote. “We believe that to have good neighbors, we first must strive to be good neighbors by reaching out to individuals, one by one, person by person.”
That got me thinking about what kind of neighbor I am, what kind of neighbor my city is, and my state and my nation. And as I looked around, I found that lots of others are worried about the same thing – about how unfriendly and unneighborly and uncivil we’re becoming – and it became obvious how much we need things like The Carter Center.

If you don’t know Jack Pfister, you’ve missed out on knowing one of Arizona’s finest. The former general manager of the Salt River Project has been a mover and shaker in this state for decades – and he continues to be to this day. There’s always a measure of comfort and respect when Jack Pfister’s name is associated with a public issue, because he brings to it dignity and intelligence.
These days, Jack Pfister is making public pleas for civility. Plain, old, decent civility.
In a guest column in The Arizona Republic recently, Pfister took on Representative J.D. Hayworth, who had written an open letter to President Bush about immigration. Pfister protested Hayworth’s “inflammatory rhetoric” and noted: “The issues of immigration policy are complex and there are no simple solutions. Solutions will not be found if discussions are hampered by simplistic and toxic phrases such as ‘greed-driven orgy’ and ‘hordes of illegal workers’ and unsupportable statements of fact.”
The column made it clear that Pfister is not supporting what he calls the “ill-advised ballot initiative” known as Protect Arizona Now. (In fact, Hayworth and the rest of the Arizona congressional delegation all oppose it, too.) But he makes the point that the way we approach these issues – the language we use and the way we debate – are extremely important.
“When the stakes are high and there is a strong moral imperative, Arizonans have demonstrated the capacity to come together to support common-sense solutions to complex social problems,” Pfister notes. As an example, he cites the “Victory Together” coalition from several years ago that successfully supported a state holiday in honor of Dr. Martin Luther King Jr.
“Members of the coalition held diverse views on the merits of a holiday honoring King, but all agreed that it was in Arizona’s best interest to communicate to the nation that Arizona was not a hotbed of bigots,” Pfister wrote. “The rhetoric over immigration issues suggests that we have dissipated the civility and goodwill that ‘Victory Together’ worked so hard to achieve.”
In other words, we’re not being good neighbors. Because, it seems to me, if there’s one rule that always applies to the quest for good neighborliness, it’s this simple rule: If you can’t hear over the screaming, you won’t hear anything at all.
Jack Pfister isn’t alone when he says, “Progress cannot be achieved in an atmosphere of incivility, and thus I make my plea for civility.”
Soon after, The Arizona Republic’s editorial page made a similar plea. “Partisan brawling,” read the headline. “Low-class political sniping is eroding America’s sense of purpose,” read the subhead.
The editorial basically said we’re all so busy calling each other names and pigeonholing our opponents into simplistic boxes that we can’t have a decent debate anymore.
The editorial read: “To hear some of the nation’s most popular pundits tell it (depending on which side of the fence they’re on), all conservatives are [intolerant] or all liberals are traitors. Conservatives always lie. So do liberals. That’s silly. It disguises the fundamental decency, tolerance and honesty of most Americans.”
The editorial also called for a more neighborly approach: “Sound public policy should rise from open debate and reasoned compromise, not from cheap shots and insults.”
I was happy to see they had the guts to take their share of the blame. “We in the media are partially to blame. We often simplify policy differences as nothing more complex than personality conflicts among the politically ambitious. We frame debates as rich vs. poor, Republican vs. Democrat, government vs. industry, business vs. labor.”
And I know I’m to blame, too, for seeing things too black and white and dismissing those who disagree with me as just plain wrong. (Although, in my own defense, I’ve never called my opponents “evil-doers,” and I’ve never called for prison time for druggies when I, myself, was abusing drugs, à la Rush Limbaugh, but we’re talking civility here, not hypocrisy.)
But I do know if there’s a second rule on neighborliness that always applies, it’s this: When you walk in the other guy’s shoes, he seems a lot more familiar.

I’ve always thought of Americans as good neighbors, which makes the world’s condemnation of us now, in the wake of war, all the more painful. I’ve always seen us as caring people, although I will admit that my faith is often shaken.
If you’ve felt disgusted or disappointed in what you see around you, I’ve got a hint that will help.
Start reading the Republic’s “Acts of Kindness” column. It runs every day on page B2, and I can’t tell you how often that column is the only thing I’ve wanted to read in the morning paper.
People write in a paragraph or two about some kindness a stranger gave, and the stories regularly help renew my faith in what caring, good neighbors we really are.
I loved the story of Ed Jordan of Glendale, who got caught in a hailstorm coming home from Prescott on his Harley-Davidson. James and Pam Weisenberger of Apache Junction saw him huddled next to his bike and stopped, giving him shelter in their truck.
Or the story of the nice lady who helped Butch Cunningham of Chandler, who wanted to buy a set of jacks for his grandkids. He’d been looking for months and finally found one, but needed to go fetch his wife and the checkbook. Butch has breathing problems and is on oxygen 24-7, so the trip to and from the store was a physical effort. A lady in the checkout line overheard him, and followed him out of the store with a set of jacks she’d bought for her own grand-kids, saving him a strenuous trip back.
Or the story of Ron Weimer of Phoenix, who lost his wallet, credit cards and bank envelope with $1,400 in cash. He calls it a “miracle” that it was found by “a gentleman who spoke no English [but] took it home to his wife” Amy. “When we met them it was all there, we tried to pay them, but they refused,” Weimer reported.
Or the story of Stephanie Rodriguez of Mesa, who found three helpers when her truck failed emissions. It was a 112-degree day, on top of it, but Larry, Tim and Steven helped fix the problem.
I have to admit, I don’t see many contributions to this column about courteous Arizona drivers, who don’t speed or cut you off or do other obnoxious road-rage things, but I’m an eternal optimist, and expect to see that message someday soon.
In the meantime, I’ll continue to enjoy the column and know there are so many good neighbors out there.

Jimmy and Rosalynn Carter are taking the neighborly approach to the world, one little problem at a time.
In Mali, they’re helping teach people how to protect themselves from trachoma, which causes blindness. In Guinea, The Carter Center is working on worm disease. It has helped broker the Nairobi Agreement to reestablish diplomatic relations between the warring nations of Sudan and Uganda. In China, the center monitored the country’s first village elections in an experiment in democracy. Its agricultural program is helping African nations in-crease their crop yields to combat hunger.
The point Jimmy Carter makes is that we’re all neighbors, or as he puts it, “Our world is a small, precious place… we cannot allow distance to define who is our neighbor.”
I agree with him. But I also know that in Arizona, we don’t have to look far to see neighbors in need, both within our boundaries and outside.
In this perilous time of war and strife, it’s more important than ever to look and to be a good neighbor. And you don’t need me to tell you what that means.
For more information on The Carter Center, visit cartercenter.org.