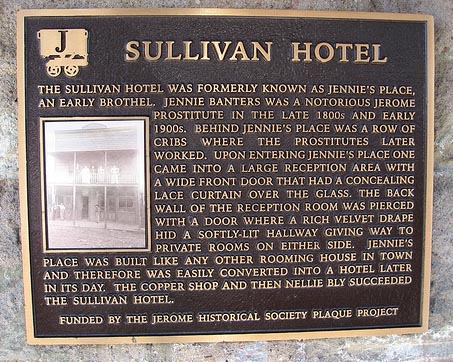 Lawmakers have used voter-restricted funds to bolster Arizona’s wobbly budget. But the ‘Funding Seeps’ have left behind on big mess..


It was such A Thrilling day when the $150,000 ceremonial check arrived to save the old Sullivan Hotel on Main Street in Jerome.

Most of the town celebrated that November day in 2007, because this state grant meant one of the most important preservation projects in the town’s history.

After all, Jerome doesn’t have money of its own to restore its buildings, which all date to the early 1900s. It’s so small that all 400 residents pose once a year for a picture of the entire town, and if it didn’t count on tourism to boost its economy, Jerome wouldn’t be there at all. Saving what it has is crucial to its very existence, so its residents certainly want to save the Sullivan Hotel.

It was built as a brothel run by the famous Madam Jennie Bauters – once the richest woman in the West – who came to the Arizona Territory specifically because it was one of the few places that allowed women to own property. The brothel later expanded and became a hotel, then a shop for artists.

Today, the four-story building is owned by Mary Wills and Sally Dryer. It houses two Nellie Bly businesses that employ 12 people. There’s plenty of room for even more shops – and more jobs and more sales tax money – if the building were restored and stabilized. Mary and Sally are so committed to making that happen that they mortgaged the home that they share and borrowed from everyone they know once the grant was awarded.

Then they got the town itself to become the fiscal agent for a state grant from the Arizona Heritage Fund (private citizens can’t get these grants outright but can partner with municipalities). The grant would cover 60 percent of the project while Mary and Sally would finance the other 40 percent. But to get ready for the grant, which was to be dispersed as work was completed, the women had to spend a ton of money up front. So far, they’ve spent some $170,000, trusting that a hunk of that would be reimbursed by the grant.

The grant that was supposed to save this piece of Jerome has been suspended by the State Parks department and might never be renewed because of a breathtaking statewide budget “sweep.”

You heard howls all over Arizona when the legislature swept $34 million from the State Parks department budget for 2009, forcing the temporary closure of parks such as Tonto Natural Bridge and Jerome State Historic Park. But you didn’t hear the ricochet of anguish when the State Parks board turned around and did its own sweeping, canceling or suspending $11.7 million in Heritage Fund projects in 25 Arizona cities and towns.

We’re talking shovels-in-the-ground projects that were stopped in their tracks.

We’re talking hundreds of jobs flushed down the drain.

We’re talking thousands of hours of grant-writing and local fundraising all for naught.

We’re talking financial devastation for people like Mary and Sally, who trusted the state to make good on its commitment to fund their grant.

And we’re not talking about a cent of taxpayer money.

Let me repeat that last point so the impact of this “sweep” sinks in: We’re not talking about one penny of taxpayer money. Every cent comes from lottery funds that voters dedicated to special Heritage Fund projects nearly 20 years ago.

So it’s easy to understand why so many people throughout Arizona are so upset, feeling they’ve been backstabbed and cheated.

It’s also easy to see why so many in Arizona – in the midst of a projected $3 billion budget deficit for 2010 – are finally seeing what “government” really means.

For those who thought “government” was a dirty word equating to waste and squandering and things we really never needed in the first place, Arizona’s dire situation has shown the reality: Government means schools, prisons, police officers, fire protection, child-welfare officials, parks and wildlife protection, among other things.

And thanks to the Heritage Fund – long considered one of the best ideas this state ever had – it has meant the preservation of the state’s heritage. As they like to say, “If you hike, ride, hunt, boat, fish, visit a park or historical site or watch wildlife, then the Arizona Heritage Fund has affected your life.”

Many fear we’re about to say goodbye to all that.

First, here’s a little background about the Heritage Fund. Back in the 1980s when Arizona approved a state lottery – man, was that a battle – the winning argument was that lottery funds would provide a nice chunk of money to the state treasury. The money would come from people who voluntarily played the lottery in the hopes of winning a big payday.

Lawmakers wanted the funds for transportation, mass transit and economic development. But citizens said they wanted an assured source of money for things the legislature never got around to funding, such as the preservation of historic and archaeological sites, wildlife habitats, parks and trails.

Voters didn’t just suggest this idea; they overwhelmingly passed it in 1990 by a two-thirds vote. In fact, it was the only citizen initiative voters passed that year. They said clearly they “had no desire to gamble with their state’s heritage,” as the Morrison Institute reported, and demanded that $20 million in lottery funds go into the Heritage Fund every year.

Half the money goes to the State Parks department, the other half to the Arizona Game and Fish Department. And from the $10 million each agency receives, each carefully gives grants to projects throughout the state. Since 1990, more than $338.5 million has gone toward preserving and enhancing Arizona. Every single town and city in this state has received at least one Heritage Fund grant; some have received several.

It’s not easy to get one of these grants. The application is dozens of pages long. There is competition from all over the state from hundreds of worthy projects. So getting a Heritage Fund grant is a big deal – at least it used to be.

“I’m hearing from people all over the state who have expressed absolute frustration that the grants have been suspended,” says Janice Miano, director of the Arizona Heritage Alliance, a group formed specifically to protect the voter-approved fund. “I think it’s unprofessional and shameful.” She adds that some of the canceled grants go back to 2005 and support projects that are as much as 90 percent complete.

Sweeping the grants has left more than two dozen projects in the lurch, she says. “Many are ‘on the hook’ with contracts they cannot keep without the grants, as well as half-restored and roofless historic properties, half-built park structures that are now an eyesore and a possible safety hazard, and fragile archaeological artifacts that now aren’t in compliance with federal standards. In addition, these projects help to bring in construction jobs and tourism dollars. The multiplier effect is significant.”

And then she says what so many are thinking, including people like Mary and Sally in Jerome, who went so far as to mortgage their homes: “Whoever thought the state would renege on a grant?”

It’s not as though the Heritage Fund doesn’t know it has to fight off lawmakers most years. After getting voter approval in 1990, the next legislature tried to take the $20 million away for other needs – which led to the creation of the Alliance that, over the years, has had to fight off 34 attempts by lawmakers to steal their money.

In response to the constant assault on the voter-approved Heritage Fund, voters passed a law in 1998 saying the legislature can’t touch the funds voters set aside for specific projects. But that law wasn’t retroactive, so the Heritage Fund remained vulnerable. The Alliance argues that voter intent was clear and the money should never be diverted to other causes.

Consider these other doomed projects:

Bullhead City has received several Heritage Fund grants over the years, and its latest one for $621,000 given in 2008 would have completed a soccer field at Rotary Park. Work had just begun. “Soccer is the highest recreational need in Bullhead City with over 900 youth signed up for this sport,” says interim Bullhead City Parks Director Karla Brady. Based on this new grant, the city was looking forward to hosting a tri-state soccer tournament in 2010 that was expected to bring in more than $1.56 million to the city. Without the grant, they’re watching that money go elsewhere.
Show Low received a $480,000 grant in 2007 to develop a 13.5-acre park in the heart of town. The land has been cleared and the project is about 20 percent finished, but now the grant has been pulled. Show Low Parks Director Jason Mangum says, “We now have an erosion-control problem, and we are left with a scar in the middle of our community.”
A $99,000 grant given in 2005 to Arizona State University’s Department of Anthropology would have preserved the petroglyphs at South Mountain Park in Phoenix. It’s 67 percent complete and has been stopped in its tracks.
The Patronato San Xavier in 2007 earned a $150,000 Heritage Fund grant to stabilize the east tower of the historic Mission San Xavier del Bac, near Tucson. The grant was used for local fundraising, notes Executive Director Vern Lamplot, and now it’s no longer there. “No doubt, there are those in state government who view the Heritage Fund sweep simply as agency cuts based on competing budget priorities,” he wrote in a letter of protest to the State Parks board. “We view the sweep as a violation of an agreement between the state and an Arizona corporation.”

Assistant Arizona State Parks Director Jay Ziemann says there were few options when the legislature swept away most of the department’s budget in 2009, and 2010 is expected to be even worse.

The Heritage Fund money was taken because it may be needed to keep state parks open, he says, and it is the unfortunate result of a very bad economic picture. “This is a very unpleasant situation,” he says. “It’s frustrating that we have to cancel grants. We did it with regret. Nobody wants to close parks, and nobody wants to cancel these grants.”

Mary and Sally aren’t sure what they are going to do with their Jerome building, which is about 70 percent complete. It’s now being held together by cables that were supposed to be temporary until the final restoration work was done.

“Our building is worse off now than before we started,” says Sally, who was the voice of “Lucy” in the animated cartoon Peanuts when she was a little girl. “The work we’ve done so far has actually destabilized the building in preparation of being restored. We’ve got a real public safety issue now.”

“We’re very ‘get it done’ people,” Mary adds. But she has no idea how she’ll pay for several more months of labor, nor some $98,000 in steel she needs to stabilize the building.

Nobody can calculate all the money that’s been wasted because of the sweep of Heritage Fund grants. But almost anyone can tell you that a fund approved by voters for a specific purpose shouldn’t be looked at as a piggy bank when times are tough.