When You’re an All-American City

When You’re an All-American City 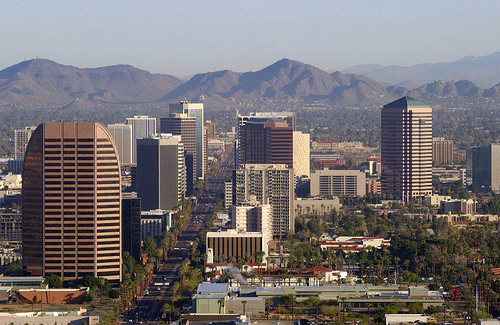 Even before the next All-American City awards are announced, there’s reason to celebrate what make Phoenix a great place to live.


I DON’T KNOW WHAT’S WORSE FOR A CITY’S reputation – disgust, derision or laughter – but for a while there last year, it seemed that any mention of Phoenix or Arizona was bad news.

Congress wanted to know whether Sheriff Joe Arpaio’s “sweeps” of Hispanic neighborhoods involved racial profiling. The U.S. Supreme Court inquired whether a school could conduct a strip search of a 13-year-old girl on the suspicion she possessed a prescription pill for headaches. Arizona State University’s refusal to give President Barack Obama an honorary degree sparked media ridicule. And Phoenix earned horrible marks for air pollution and a dubious distinction as the “kidnapping capital” of the country because Mexican drug cartels’ immigrant smugglers use it as a hub.

You could have spent the entire year trying to convince friends elsewhere that Phoenix really isn’t that bad and, in fact, is a pretty nice place to live.

So there couldn’t have been any better news than the April announcement that Phoenix was a finalist for the 2009 All-America City Award – an honor so coveted it’s known as the “civic Oscar.” Phoenix is one of 32 cities across the nation – and the only one in Arizona – recognized by the National Civic League. The award honors community collaborations on critical challenges – how a city uses its people, businesses, nonprofits and educators to solve community problems.

It was apropos that a committee of 50 people – 30 citizens and 20 city staff members – put together the application for the award and then created a presentation for the league’s June conference in Tampa, Florida.

I was one of the people on that committee. It was a kick. And even though I thought I knew this place inside and out, I learned some new things and realized something important: Phoenix has a lot to brag about when it comes to being an All-America City.

The award application asked us to outline three community-driven projects. I remember thinking no award could be more tailor-made for Phoenix, where the mayor and City Council form a citizens’ committee for almost everything.

While that’s the standard today, I’ve covered this city long enough to know it wasn’t always that way. Thankfully, in the late ’70s, Phoenix realized it was growing so fast it would lose all sense of community if it didn’t get citizens intimately involved in decisions.

So today, nothing major happens – from rezoning requests to bond issues to the annual city budget – without citizens having a major voice.

But the award committee wanted specific examples of how community involvement worked in Phoenix, and the committee chose three projects:

The transformation of our Downtown into an oasis of higher education facilities, specifically Arizona State University, the University of Arizona Medical School and our new bioscience research facilities.
The city’s massive parks and land preservation projects, created and saved both by voters and an army of volunteers.
The dedication of Teen Centers in every Phoenix library – an approach that was created here and is now spreading to libraries around the nation.

They asked me to be on the committee because I’m on the board of The Friends of the Phoenix Public Library, and we were instrumental in creating the Teen Center concept.

For each project, we were instructed to write an essay that described our efforts. For the Teen Centers, we wrote:

“A decade ago, everyone would have laughed if you’d suggested a teen-only space in a public library where adults aren’t allowed and teens write the rules.

“But today, walk into any of Phoenix’s libraries and stand in awe: a diverse group of teens studying, listening to music, exploring the Internet and watching movies. It means a place where teens feel comfortable in their own skin and explore their individuality and creativity in a safe environment.”

We noted the first Teen Center opened in Burton Barr Library in 2001 – led by the Friends, the Library Foundation and a dedicated library staff headed by Toni Garvey, who’s been recognized as the nation’s top public librarian.

Instead of guessing what teens wanted, these groups asked them, and a teen advisory council laid out their needs and rules. They wanted big, funky furniture; lots of computers; and, of course, anything digital. They wanted vibrant colors and vending machines (in a library?!), and they wanted adults to stay out so this could truly be their space.

But would it really work? As we noted in our essay: “The doors opened and librarians held their breath: Could diverse teens in Phoenix coalesce to study and relax, or would racial or neighborhood cliques cause problems? Everyone recalls the day with excitement. The first Teen Center was filled with a variety of kids, including some wearing gang colors, but everyone was getting along and the space officially was considered ‘neutral territory.’ The explanation is heard again and again from teens who flock to the center – hundreds each day: ‘We can’t believe you really listened to us.'”

Once we got teenagers inside our libraries, we got them reading. Last year, we saw a 42 percent increase in teens checking out books, CDs and DVDs.

We also discovered teens were wonderful volunteers, and the library now depends on them for its summer reading program for children. The teens also sponsor a naturalization ceremony for new American citizens every year.

And we keep learning what teens need, which is why we just opened a new space in the Downtown library that we call College Depot. It’s a one-stop place to help teens plan for higher education, including free college prep services and help with financial aid and scholarships. The library also is raising money to build a 21st century learning environment called the “Digital Studio.”

That’s how another application essay began, touting what is one of the most amazing transformations of a Downtown anywhere in the nation.

Even though I’ve been writing about this and watching it – after all, it’s in my ‘hood – I was pretty amazed when we laid out the entire package.

There are really two new campuses in the heart of the city:

The ASU Downtown Phoenix campus covers 18 acres and includes the reuse of some existing buildings along with hundreds of thousands of square feet of new construction. It houses the Walter Cronkite School of Journalism and Mass Communication, College of Nursing & Health Innovation, College of Public Programs and University College.
The Phoenix Biomedical Campus is a 28-acre research site that includes the international headquarters for TGEN (the Translational Genomics Research Institute); the UA College of Medicine and its College of Pharmacy; ASU’s Department of Biomedical Informatics; a branch of St. Joseph’s Hospital & Medical Center; a division of the National Institutes of Health; and Phoenix Union High School District’s Bioscience High School.

The city has invested nearly $500 million in these campuses, and the expected return is awesome: More than $4 billion in new investments already is under way – from new hotels to the revamped convention center, light rail and several private businesses.

“The community’s investment and partnerships for research and education eventually will create 26,000 jobs, educate 18,000 students and spur an economic impact of $2.6 billion annually,” our essay noted.

If you want absolute proof that involving the community in decisions is good for a city, then Phoenix’s parks system – from flat parks in neighborhoods to desert mountain preserves – is it.

Developers were gobbling up the desert at “an acre an hour,” The Arizona Republic warned years ago. Not only did that demand we preserve desert land, but it meant those new developments needed community parks – while the older parks in the central city needed to be revamped.

As a result, Phoenix voters passed some of the largest park bond issues the nation had ever seen, agreeing to tax themselves to promote public parks and preservation.

Since 1999, the Phoenix Parks and Preserve Initiative has raised nearly $200 million to build 61 playgrounds, 47 lighting projects and 34 sports-related projects; bought nearly 2,400 acres of Sonoran Desert preserve land; and renovated 176 older parks. In May 2008, voters overwhelmingly passed a 30-year extension of this tax.

I’m writing this column long before the award winners are announced. But by the time you read it, the news will be out, and I’m betting we’ll all be celebrating.