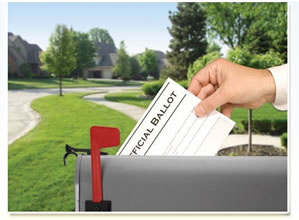 Here’s the first thing the Legislature should consider as it starts its new session – a complete mail-in election system for Arizona.


I might have looked a little silly, holding a box of donuts from the Safeway bakery as I spent an hour standing in line on Election Day last November. But you’ll remember it was a lovely day, and we’d been waiting for this moment for so long, so I didn’t mind.

I’m one of those people who loves going to the polls on Election Day, and I take the donuts to the poll workers to thank them for the long hours they sit there, making democracy a reality by checking in registered voters. I love visiting with everyone else who pays tribute to the old-fashioned way of voting, and it’s always a thrill when I put on that sticker that says, “I voted today.”

Most of my friends have abandoned this ritual. Many have tried to talk me out of it, but I have a feeling I’ll want to go to an actual polling site every Election Day for the rest of my life to cast my vote – just as I’ve done since I turned 21.

But that doesn’t mean I don’t support mail-in voting. In fact, if there ever were an idea whose time has come, it’s the idea that Arizona should follow Oregon’s lead and go to “complete mail-in” elections.

I have to admit, I wouldn’t have been pushing this idea if I hadn’t called Maricopa County Elections Director Karen Osborne – an old friend and the most trustworthy person I know when it comes to the sanctity of the ballot. I originally called her to test out an idea I had about opening polling places earlier, like say, one or two days a week during the month before an election for those who wanted to vote early. I thought it would be a way to reduce the long lines on Election Day. I had tried this idea out on a friend who formerly headed elections in another county, and she told me I was nuts, so I thought I’d better double check with Osborne.

She had a nicer way of telling me I was nuts.

“I can barely find the 7,700 people I need to work the polls for one day,” she said instantly. “I couldn’t possibly find people to man the polls for several days.”

But then she said she did have an idea that would indeed make voting easier, more efficient and – a political keyword these days – cheaper.

“We should go to an all-mail election,” she said. In fact, she points out, we’re already halfway there. Osborne notes that the November election in Maricopa County saw an 80 percent turnout – one of the best responses in years – and 55 percent of that turnout came from mail-in ballots.

So as the Legislature starts its new session this month, let me put this on the agenda as something it could do lickety-split to make voters happy.

But in case you’re a traditionalist like me, let’s let Karen Osborne convince you, like she convinced me, that this is one incredibly good idea.

It all started with the “absentee” ballot that has always been allowed in any election. But in Arizona, the original rules said you could only get an absentee ballot sent to your home if you were over 65, disabled, or could prove that you’d be absent from your voting precinct on Election Day.

But then Arizona had a strange election in the spring of 1991. You might remember it: None of the candidates in the governor’s race the previous November received a majority of votes, triggering a runoff between Republican Fife Symington (who ultimately won) and Democrat Terry Goddard.

What’s significant here is that 1991 was a particularly tough winter. There was concern that Navajo voters on the reservation in Northern Arizona wouldn’t be able to get to polling places. So Republicans and Democrats in the Legislature agreed that year to soften the “absentee” rules.

New rules allowed eligible voters to request an early ballot from their county recorder, as long as the elections officials could check every single signature to be sure the ballot that arrived actually came from that specific voter.

“The focus shifted to the county recorders becoming the gatekeeper,” Osborne says. “That’s why we demand that every mail-in ballot is signed. We match every signature against the voter file, which makes this the most secure way to assure this is really the voter.”

She says any fear that somebody could fake a ballot is unfounded since this check is thorough and precise.

“If a signature doesn’t match – things happen, people have strokes, they get older, their handwriting changes – we contact you personally to double check,” she says. “Then sometimes parents sign for their college-age children and, of course, we catch that and that isn’t allowed.”

She estimates that of the millions of votes cast in the last election, they had to double-check signatures on about a thousand mail-in ballots. And she’s obviously proud to report that from the entire November election, she found only one example of intended voter fraud: One man tried to vote three times, and she has turned his name over to the Maricopa County Attorney’s Office for prosecution.

Arizona found that so many people were requesting an early ballot every election that it soon created the “permanent” early voting category – people could sign up to automatically get a ballot sent to their home for every election. Osborne says she thought it would be popular, but even she was amazed at how quickly Arizona voters embraced the permanent category.

“In Maricopa County, we have 1.7 million voters, and 690,000 of them are on the permanent early-voting list,” she reports. “In November, we had 826,000 requests for early ballots, the most we’ve ever seen. And we had a 93 percent return on the mail requests.”

For someone whose life goal is to have every registered voter cast a ballot, Osborne is giddy about that kind of response.

She notes the county has a plan to cover any problems an early voter may have. Say someone requests an early ballot but doesn’t get it, or loses it, or the “dog eats it.” If there’s time to mail that person another, it will be done, or else the voter can go to the polls and cast a “provisional” ballot.

Or let’s say voters get a mail-in ballot but forget to send it back; they can simply drop the ballot off at any polling place without having to wait in line.

Here’s what else Osborne likes about all this: “We can count early votes seven days out from the election, so we count mail ballots first, as they come in. We’ve got eight separate computers in the county to count the votes. We don’t put any of the totals together until Election Day, but we can have most of the votes already counted by the time the polls close.”

Second, votes from the polling places are counted, followed by any mail-in ballots that were dropped off, then any provisional ballots, and finally any ballots with write-in names.

“Every single vote gets counted,” she stresses. “Our counting room is going 24-7, and you can go to our Website and watch it. We have two armed deputies there at all times – we have the most secure form of voting in the world.”

So she’s convinced Arizona is poised to embrace an all-mail election.

This idea was trotted out four years ago and voters said no, but Osborne believes that was because there was no provision for in-person voting. She has the “fix” that will make it work the next time voters are asked.

“I believe some people were just uncomfortable with the idea they couldn’t go to the polls if they wanted to,” she says. “I read the voters saying, ‘I want my option,’ so the next time, I’d specify that we’d still have some 50 polling places in Maricopa County for those who want to vote on Election Day. The idea just needs to be marketed differently.”

She says she’s had lengthy discussions with officials in Oregon about their system, where every vote comes by mail. “Their people love it,” she reports.

Osborne is convinced Arizona voters will love it too when they realize a mail election system would save some $7 to $8 million – $5 million in Maricopa County alone, where 61 percent of the state’s voters reside.

Best of all, she predicts a mail-in system would increase voter turnout.

“Oregon has seen an increase in voter participation,” she says, adding that “people are going to participate, and that’s the whole thing.”

Indeed, this is an idea whose time has definitely come, and the Arizona Legislature could make it happen tomorrow. I’m betting they’d get nary a sound of dissent from Arizona voters. All it takes is a simple bill written just as Osborne wants it.

In the meantime, if you want to get on the permanent early-voting list, call 602-506-1511 or visit recorder.maricopa.gov.