If I Were Queen

If I Were Queen 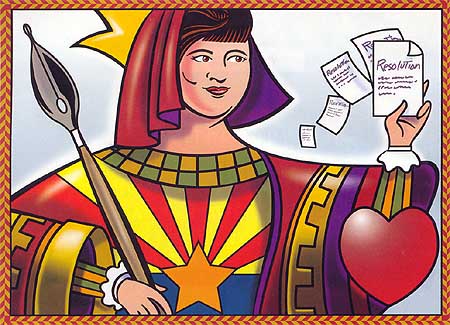 
Although my mother told me never to brag, I think I’d be a fabulous queen of Arizona. I know some will disagree, but I think I’d bring compassion, fairness and sensitivity to the job. Besides, I’ve had lots of experience at this fantasy, since PHOENIX magazine lets me play queen of Arizona every January. We’ve done it for years now.

So instead of making New Year’s resolutions for myself, I make them for Arizona, as though I had a magic wand to make everything right and bright and fixed.

Here we go for another year, in no particular order:

If I were queen, I’d decree that Arizona lawmakers play nice with others, especially with other lawmakers.

Come on, everybody, let’s put partisan scrabbling and “gotcha” tricks aside and learn how to focus on what’s best for Arizona – not what will make the other political party look bad. If November’s election outcome said anything loud and clear, it was that voters want problems solved, not political posturing.

I’m encouraged that some of the new legislative leaders at least sound like they want to work in harmony rather than harass each other, and I’ll take them at their word. So I hope I see a lot of “reaching across the aisle,” as they say in political circles. Because, I hope you all got the memo: The days of bullying are over!

And speaking of our lawmakers, if I were queen, I’d sit them down and explain the environmental dangers facing our world, because, obviously, some of them don’t get it. They proved this again last November when they slapped the hands of the Arizona Department of Environmental Quality for regulating greenhouse gases in a seven-Western-state cooperative and promoting fuel-efficient cars through another multi-state plan. Apparently, some Republican lawmakers think Democratic Governor Janet Napolitano has “shoved this down our throats” and, therefore, don’t want ADEQ fulfilling the compacts we’ve already signed. What? Our legislature is going to rule we don’t want to regulate greenhouse gases? They want to rule we don’t want clean car emissions?

I agree with Sandy Bahr of the Grand Canyon chapter of the Sierra Club, who suggests the legislature only keeps ADEQ around – while clipping its wings and demanding softer regulation – to hold the federal Environmental Protection Agency at bay. That’s because without a state agency, the federal agency would rule. Bahr goes so far as to say it would be better to live with the EPA than to have a state agency whose hands are tied. I agree. And I hope lawmakers who don’t get it will wake up.

On another road going in the same direction, if I were queen, I’d listen to T. Boone Pickens, who wants our country to gain energy independence by harnessing our wind and solar power and switching cars to natural gas. Do you realize that the Navajo Nation plans to build the country’s second largest wind farm in northern Arizona? The reservation stretches across “America’s Wind Corridor” that goes from Canada to Texas. If we harnessed that wind, we not only could produce a healthy chunk of power but also 3.5 million new jobs along with it. That sounds particularly good right now. On top of that, America’s Solar Corridor stretches from western Texas through New Mexico and across Arizona to Southern California.

Pickens says developing wind and solar power could reduce our dependency on foreign oil by 30 percent – and that sounds really good.

If I were queen, I’d focus on buying Arizona-made products; there’s nothing like helping out your neighbor whenever you have a chance, especially in tough economic times. So I’d have people visit their local farmers markets to buy Arizona-grown produce.

I’d also fill my shopping basket with other delicious things being made by our citizens. For instance, I’d buy more Goldwater Salsa products created by Barry’s beloved daughter, Joanne. I’d continue to buy tons of Arizona-made olive oil from our very own Queen Creek Olive Mill, where Perry, Brenda and the entire Rea family produce my favorites: Mexican Lime Olive Oil and Blood Orange Olive Oil. Certainly, I’d load up on Cerreta Candy, made in a sweet chocolate factory in Glendale that’s also fun to tour. I’d buy Arizona wine and roses created on our own farms. And I’d fill my golf bag with Arizona-made Ping clubs, recognized as being among the best in the world.

If I were queen, I’d have everyone in Arizona help the Orpheus Male Chorus celebrate 80 years of artistic excellence.Imagine that, a male choir that predates Phoenix as a thriving city. That makes it the longest continuously performing arts group in Arizona.

Since its first meeting on November 4, 1929, in the YMCA Downtown, the focus of this wonderful chorus has remained constant: bringing beautiful music to audiences throughout Arizona. They’re so good that they’ve also performed in 14 countries around the world, including the great Concert Hall of Vienna, Austria. In its long history, the chorus has performed more than 1,000 times, produced eight albums and CDs, and been recognized as one of the leading male choruses in the United States.

I love this group and want to wave my magic wand to get all of Arizona to embrace it as a true state treasure.

If I were queen, everyone would take a field trip in 2009 to the Arizona Women’s Hall of Fame in the Carnegie Center (1101 W. Washington St.) in Phoenix. This dignified museum pays tribute to the remarkable women whose contributions to the arts, athletics, business, education, government, humanities, philanthropy and science have played a significant role in the history of Arizona.

So far, 75 women have been inducted. Last year, the new inductees included: Betty Accomazzo, a rancher, historian and author from Laveen who helped preserve the histories of Arizona pioneer ranching families; Flagstaff scientist Katharine Bartlett; and educator C. Louise Boehringer of Yuma, who is called “the mother of the Arizona educational system.”

You can’t go through this museum, reading the biographies of these strong Arizona women, and not marvel at their awesome contributions. Take your kids or grand-kids – boys and girls should be studying these women in Arizona’s schools.

If I were queen, I’d publicly celebrate all those groups that are dedicated to helping others, such as the Palo Verde Women’s Golf Association. The queen is a member of this group – one of the poorer golfers, to be honest – but is so proud that for nine years, these 50 female golfers have helped feed thousands of people through St. Mary’s Food Bank.

Each November, this group, led by Sharon Austerman and Gayle Gerard, sponsors a “Turkey Shoot” golf tournament that draws more than 100 women from all over Arizona, ages 40 to 80. This year, some 15 golf clubs were represented. We sell raffle tickets for items begged, borrowed or bought by our members, and all proceeds go to the food bank. This year we raised $4,552. Since 2001, this annual tournament has raised enough money to provide 168,474 meals through St. Mary’s. See why I’m proud?

I wish The Arizona Republic would start a special feature – like my old “Hurrah for Arizona” on 3-TV– that celebrates efforts like this. I bet there are so many groups doing good things out there that the column could run daily. Maybe the paper could call it “Local Heroes.”

If I were queen, I’d take everyone in Arizona by the hand and lead them through the Rio Salado Habitat Restoration Project that has turned a 5-mile stretch of the usually ugly and dry Salt River into an oasis that is becoming a school-trip favorite. It’s just south of Downtown Phoenix.

This unbelievable transformation – the queen visited and still marvels at what she saw – is a project of the Arizona Audubon Society, which raised $100 million to make it happen. The project is backed by voter-approved bonds and partners such as the City of Phoenix, the U.S. Army Corps of Engineers and Maricopa County. Congress, thanks largely to Representative Ed Pastor, gave us $85 million in federal Water Resources funds. A new education center is being constructed now, but in the meantime, hundreds of species of birds and animals have settled in for a rich, lush life. One minute here shows you what civic vision can do.

If I were queen, I’d open the hearts of those who voted to deny the right to marry to same-sex couples. What strikes me as particularly odd about the vote is that it was pushed here by two religions whose own histories of persecution are legendary – Mormons and Roman Catholics.

How can that history lead you to instill discrimination into the state constitution? Because that’s what the vote meant – gay people are allowed neither the public declaration of their love through marriage, nor the legal protections marriage affords.

I believe this is the civil rights fight of our time. I have friends who went to California to be married this summer (before voters there overturned the right in the November election). These men have been together 36 years. They’ve buried parents together and raised children together, and both are active in community organizations on health issues and the arts. They are one of the most inspiring married couples I know. The notion that they don’t have the right to be married in Arizona, to me, is ridiculous.

And finally, if I were queen, I’d whisper to the little girls of Arizona: “You can grow up to be president, even though you live in a state where four men have already tried and failed – one of them twice.” Yes, conservative Republicans Barry Goldwater and John McCain have been the Republican candidates for president and neither made it. Meanwhile, liberal Democrats Morris Udall and Bruce Babbitt threw their hats into the ring but didn’t win the Democrats’ nomination. But don’t despair. I have a feeling that about the time you’re old enough, Arizona will offer up a moderate woman and she will win the presidency. And honey, that could be you.”

That’s the queen’s last word for this year.