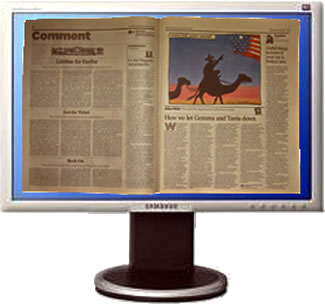 What’s black, white and read all over? These days, it’s not a newspaper. Massive changes to the EAST VALLEY TRIBUNE could turn the valley into a one-paper town, and that’s not good for anyone.


There are a few rituals that help govern my life – I celebrate Christmas with a gusto that is staggering to most of my friends; I can find the flimsiest of reasons for merrymaking; I honor my mother and my late father; and I believe my guardian angel has saved my life more than once.

And then there’s how I begin every day of my life: I read the morning newspaper.

Since I live in Phoenix, I happen to read a paper I used to write for – the paper that first brought this Midwestern girl to Arizona in 1972. Issues of The Arizona Republic stack up in my gathering room morning after morning until I move the bundle to the recycling bin. Clippings of the Republic are scattered about my antique round table, stories I’ve ripped or snipped for future reference.

If I lived in the East Valley – or Scottsdale or Tempe – I’d also be reading the Tribune, which has always been a scrappy paper that produces first-rate journalism. In fact, it’s the Tribune that garnered national prominence for Arizona in October when PBS spotlighted its excellent series questioning the policies and practices of Maricopa County Attorney Sheriff Joe Arpaio. (I can’t think of any Republic article that caught that kind of national attention, although the paper recently followed up with a similar story.)

So I wanted to weep in October when the daily Tribune announced in a story that it was going to a drastically different format. The headline read: “Tribune announces major cutbacks; 4-day paper.”

The story began: “The Tribune announced a major shift in strategy Monday [October 6] in which the newspaper will withdraw coverage and distribution from Scottsdale and Tempe to concentrate on Mesa, Gilbert and other parts of the East Valley.

“Buffeted by an unprecedented downturn in the newspaper industry, Tribune Publisher Julie Moreno said the Tribune will move to a four-day-a-week free distribution in the cities it will continue to serve – Mesa, Chandler, Gilbert and Queen Creek…. The newspaper also will provide coverage of news in those communities seven days a week in its online edition, she said.”

It takes a moment for that kind of news to sink in. A major American daily newspaper, which has always existed on advertising revenue and subscription fees, is becoming a free newspaper that will only publish on paper four days a week. The only thing “daily” left for this legendary newspaper is its Internet version – news available on a computer screen.

I have known for a long time that newspapers are in trouble. You can’t be in this business without watching your friends being offered “buy-outs” – a nice way of being shown the door in yet another staff cut. Thriving businesses don’t decimate their staffs as newspapers around the country have done, as the Republic has done, and as the Tribune did in October when it cut 142 jobs – about 40 percent of its overall staff.

Newspapers haven’t been thriving for many years now, mainly because they’ve seen an explosion in 24-hour cable news and because Internet bloggers and “news” sites have become popular information sources for younger readers. Subscriptions are down, advertising revenue is down, and there are only so many cuts you can make in a business with expensive overhead – big buildings, larger printing plants, miles of newsprint, all that ink, a cumbersome distribution system, etc.

The Tribune isn’t the only one suffering, however. Did you notice that Channel 8 just cut a half-dozen staff members, or that there have been big cuts at channels 3 and 12 recently? From each media outlet that cuts back, it likes to sing the old song, “We’re going to do more with less,” but we all know that song isn’t true. They do less with less, and that can’t be a good thing.

Some have been predicting the death of the American newspaper for a long time, but I don’t believe that will happen. Changes, yes, I expect that. Complete obliteration? No.

But when the Tribune made its shocking announcement, I realized my idea of change underestimated what’s really happening. I called around to get some consolation, but I’m not sure I found it.

“This is a sad day for everybody, not just the Tribune,” says my old friend Dan Barr, who also is the state’s top First Amendment lawyer and has been the Tribune’s attorney for more than two decades.

“I liken it to the whaling business,” he adds, and I know right away what he’s talking about. There was a time when whale oil was a major fuel for the world, collected by sailors who set out on big boats to kill these giant beasts. When the whale population dwindled, people found other ways to find fuel. Or as Barr puts it, “People will still use boats and oil, just not whale oil.” And that’s what he thinks is happening in the newspaper business.

“Some papers will be able to remake themselves and others can’t,” he says. “The old business model isn’t working anymore.”

He doesn’t have to look far to find the evidence. His own son, Andrew, is a reporter for an Internet news site called Politico. “My son reads a lot, just not in newspapers. His generation is getting their news through the day, not just in the morning paper.”

That is precisely the point: News is happening 24-7 these days, and that doesn’t bode well for a news source that’s available only once every 24 hours.

You can see how out-of-date that message is now. Now I would have to say: If you want to know what’s happening right now, go to the Internet, to any number of blogs, or turn on cable television, which never sleeps.

And so does the woman who pulled the plug on the daily Tribune.

Tribune Publisher Julie Moreno might be expected to put a “best face” on this change, but she actually makes a lot of sense.

“There’s been a call for the newspaper industry to do things differently, and we see this as an opportunity for us to fight the tough battle and do something different,” she tells me.

She calls covering local communities “our strong suit,” and she says the changes are meant to enhance that (except for in Scottsdale and Tempe, which are losing their dailies all together).

She acknowledges that while papers across the country have tried various strategies to change and keep up, hers is about the largest newspaper market to make such a drastic change. As she notes, major metro papers like hers – or the Republic – have been hit the hardest by the change in news gathering, since they try to serve a large, dispersed audience while facing a huge overhead cost at a time when ads are not being sold because consumers aren’t consuming.

Instead, Moreno says she’s trying to target specific areas and cover the news that is relevant to them.

That she’s going to a free newspaper would have brought howls just a few years ago from traditionalists who like to use the mantra that a “real” newspaper is one someone pays for (as opposed to a free paper like the Phoenix New Times). But free is becoming the new standard, Moreno says. “It’s not surprising, because people are less willing to pay for information when they have other outlets to get it.”

Along with cutting news on actual paper, Moreno says the Tribune is beefing up its Internet site. She doesn’t think anyone should write the obituary for the American newspaper now, but they should be ready for a different type of newspaper in the future.

That’s the same message I get from much-respected Tribune Editor Jim Ripley, who is retiring during this shift. “What this means for Valley journalism is less competition,” he tells me. “We’re repositioning the Tribune, focusing more than ever on the communities we serve, but probably not as aggressive on state and regional news.”

But while some fear what’s happening, other publishers in the Valley say it’s about time – like Jim Larkin, publisher of the Phoenix New Times.

“I’ve believed in free newspapers for 30 years,” he tells me. “There are going to be fewer and smaller metro dailies and many more three-to-four-times weekly publications. There is an opportunity for younger journalists/entrepreneurs to do a Web-print combo publishing business.”

I’m all for that – I love competition. I think it keeps people on their toes. Because if you’re the only news organization in town, you alone decide the news, and if you don’t want something covered for personal motives – politics, protecting friends, protecting advertisers – then there won’t be a story at all. And the public loses out.

Win Holden, publisher of Arizona Highways magazine, echoes this thought. “The market just became smaller, non-competitive and lost an important voice,” he says. “It also means the Republic can continue to shrink in size and resources because the competitive landscape just got more barren – there’s nobody to keep them honest.”

Republic Editorial Page Editor Phil Boas isn’t celebrating this possibility, however. “There was no glee at the Republic when this news broke,” he says. “Quite the opposite. We know these people and feel badly for them. We also empathize because we recognize our industry is going through historic and necessary change. We know the bell tolls for all. Newspapers are not unique in that way. Every industry must reinvent itself from time to time. It’s called progress. Unfortunately, progress can be extremely painful.”

I just finished tearing apart today’s local newspaper on stories I want to pursue in the future – there’s one about a suspicious campaign fund and another about an ongoing political trial. But I am reminded that the days of reading the daily paper may be numbered.